Across the world, the name Sony is associated with innovative audio and video products, with the Walkman, one of the most iconic of all time. With that in mind, we are going to review a product that was Sony’s first foray into the 4k player arena, namely the UBP-X800. 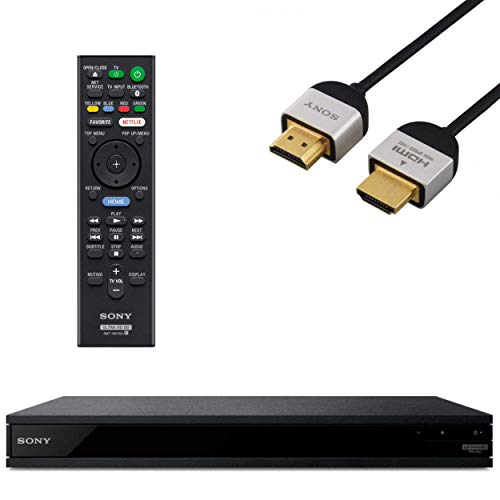 Sony released the UBP-X800 in 2017, and as we mentioned in the introduction this was the first product that they had created for the Ultra-HD Blu-ray player market.

The UBP-X800 has several similarities to Sony’s previous Blu-ray player, the UHP-H1, and in particular, from an aesthetic point of view, its minimalistic and clean design draws comparisons. However, the UBP-X800 has far superior capabilities with respect to video and audio playback.

You know that when you buy any Sony product you can almost guarantee that it is going to be in the top echelons of the quality stakes and that is why they are such a successful brand. This means that anyone looking to purchase a new Blu-ray player who wants a brand that is as reliable as they come, will certainly consider this model.

In terms of the appeal of its performance, the main driver is going to be its 4k Ultra-HD technology. For that reason, those who desire to watch movies, where the picture clarity and color sharpness is as near to perfect as possible, will also find the UBP-X800 very viable option.

When you purchase this product, your delivery should include the following in the box: 1 x Sony UBP-X800 Blu-ray player, 1 x remote control, 2 x AAA batteries (for the remote control), 1 x 4k HDMI cable and the owner’s user manual.

One of the biggest appeals of the Sony X800 is its imagery technologies which allow you to watch movies and other visual media in more clarity and vivid color than you have ever done before. At the heart of this is its 4K Ultra-HD capabilities which provide a resolution that is four times standard HD.

The crystal-clear images are not just possible when you watch movies on Blu-ray discs, but you will also experience a greatly enhanced view when you play DVDs with the player too.

No matter how good the images are, they are for nothing if the accompanying audio is sub-standard, so you will be pleased to know that the X800 comes up with the goods in the sound department too. That is in no small measure thanks to the Dolby Atmos and DTS:X technologies which make every type of sound clear and precise.

The benefit is that not only does it make watching movies a great all-round experience, but it also means when you are listening just to audio, you enjoy it more. This could apply to any of the audio types that you can input to the player. These include CDs that you play or mp3s which are listened to when you connect an external device, such as a laptop. Bear in mind that there are other media formats that you can play via the X800.

We mentioned connecting to the X800, and you have several options here. It has HDMI, plus digital co-axial connections that can be used, plus there is a LAN connection for linking your player to the internet. It also has Wi-Fi should you wish to connect to the internet wirelessly.

When you first receive your X800 Blu-ray player no doubt you will be keen to play your first movie, but you will be well served if you are patient and follow the setup instructions exactly as they are outlined in the owner’s manual. This isn’t difficult with the main task being to connect the player to the TV via the supplied HDMI cable.

Other devices that you can connect include an amplifier, and a computer or laptop. You will obviously need to purchase the appropriate cables in order to connect these.

If your home internet has Wi-Fi, then you connect your player to the internet via this in order to access streaming services such as Netflix.

One feature that the X800 does not have is Dolby Vision which is an enhanced technology to make HDR produce even greater images on the screen. If you are a fan of Sony products, you can stay loyal to them, as their UBP-X800M2 Blu-ray player has the technology we have just mentioned.

Other advantages it has over the X800 is enhanced connectivity capabilities which include more HDMI connection and additional digital audio connections.

While it is not at the top of the range of Sony’s family of Blu-ray players, as the first Ultra-HD it produced, the X800 certainly deserves some consideration. It offers excellent video and audio quality, and a degree of versatility that easily makes it recommendable.